Glenn Beck, America’s proven reserve of comic delight, drills once more into the buried treasure which is McCarthyism.

Thursday Beck launched a spirited defense of the late Senator’s good works, in the midst of an insane roundup of the history of the Roosevelt administration.

Attention to detail suffered in Glenn’s thrilling tale, as he recalled [at 3:30] Hitler’s 1939 pact with the Nazis. 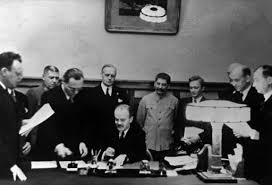 Perhaps he meant the better known Hitler-Stalin pact of that year?

Beck also gets Alger Hiss’s conviction date off by a year, and somehow wanders into American intervention in Vietnam without mentioning the name, substituting trite facts about the dead-on-arrival South East Asia Treaty Organization.

Suddenly the long dead Solon and his vivid imagination were all the rage. Salon posted the Beck video, Steve Benen commented,  Balloon Juice linked to that, and it’s commentariat sprang into action, rushing once again to assure the nation that something somewhere someday nailed Owen Lattimore.

“The FBI had a source claiming that Lattimore was indeed feeding information to the Soviets. I would hope that you could concede the difficulty of providing evidence which could compromise intelligence sources, which given the FBI report I provide you seems to be case.“

Which of the ninety-one pages this clown links to substantiates the bold claim is unclear, or why the entire FBI file [which Lattimore himself FOIA’d] isn’t linked to.

McCarthy had a source who confidently told the Senate he’d been informed as early as 1937 that Owen J. Lattimore was a secret Communist.  Confidence by some in Louis Budenz is undiminished despite Lattimore’s tragic lack of any middle name.

Tune in Monday night, when Becky threatens to roust the Reds creepin’ round Obama.